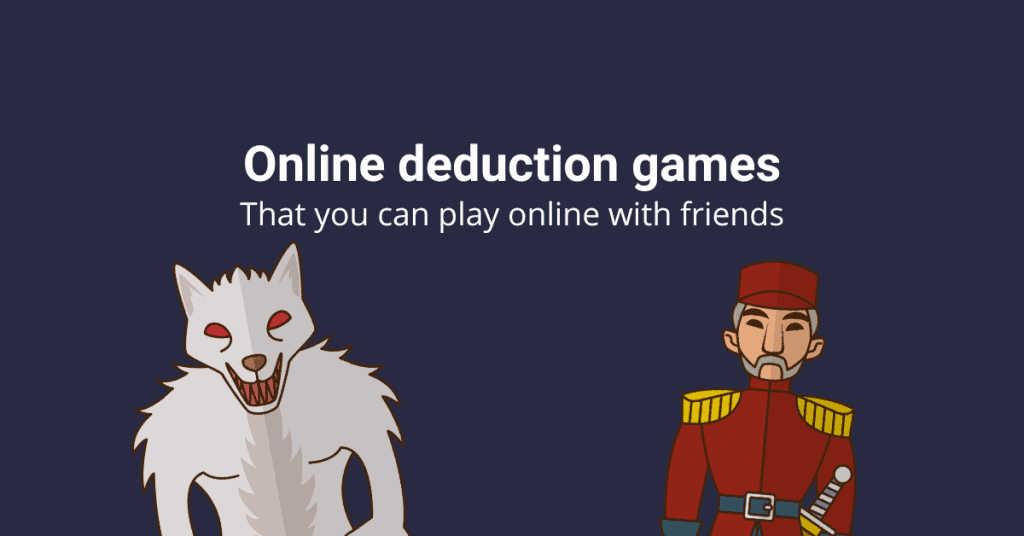 Deduction games are games, in which the players take up secret identities and attempt to uncover each players hidden role or their team allegiance. The goal of each player is to keep his own identity hidden while at the same time try to figure out who took up what role, without giving himself away. Typically, the games resolve around a criminal case, like a murder. One player randomly gets assigned the murder role and the other players take up the roles of detectives or civilians. The murderer the must use all his rhetorical skills to convince the players that he did not commit the crime. That´s right. Deduction games are all about being the best liar.

The Internet offers lots of new possibilities to play deduction games. They have become more accessible and offer many possibilities to have fun with your friends, but also to train your communications skills. Some companies have started to use deduction games in assessment centres and team building events. Deduction games require a lot of attention, because the smallest detail can help to unveil the truth behind a player´s identity. They can easily fill up a whole evening full of fun and laughter and you might even discover sides of your friends of your friend’s personality and help you to get to know them even better.

One of the best examples of social deduction games is Werewolves also known as Mafia Game, which, for sure, is something that you have encountered in your life. It is usually played by high schoolers during sleepovers and breaks, but even though you are not from this bracket, you are free to enjoy and discover what lies behind this awesome game! As a bonus, we, Gidd.io, made the game accessible by making it available online!

Commonly, deduction games are played in real life. The roles get assigned with cards. A well-known real life deduction game is the party game classic “mafia”. It includes a total of 47 different roles for the mafia team and the civilian team. On top, there are also neutral roles. The huge number of cards offers a lot of variability, and no game is the same, because there are almost endless combinations of roles. The game became a huge hit, so it was sure that a online version of the game would soon be released. With “mafia.gg” the classic party game became accessible for new groups of people, that can´t meet up to play together in real life. The online version has even more roles, a total of 218. The roles are assigned to either the team of the villagers or the mafia. Every night, the mafia eliminates one villager but acts like regular town folks on the day. During the day, the villagers must figure out who the mafia members are. They debate and hold a vote who they will condemn to the guillotine. The mafia members also take part in those debates and votes and must try and convince the other players of their innocence and ideally blame the murder on someone else. The game alters between day and night until either all villagers are dead (mafia wins), or every mafia member has been delivered to the guillotine (village wins).

Even before the Covid-19 pandemic, online deduction games saw a rise in popularity. Many different games rose on steam, making use of the greater possibilities a fully developed games offers over a browser game. Well-known is the game “Town of Salem”. Referring to the town of the famous witch hunts, this game expands on the principles set by mafia. It also has multiple roles that are divided into teams. In Town of Salem, there is a total of five alignments, the villagers, the mafia, the serial killers, the arsonists and the neutrals. Before each game starts, the players can customise which roles will be in the game in the lobby settings. A lobby can be filled with a maximum of 15 players. The chosen roles then get assigned at random when the game starts.

The villains also murder the town folks at night, just like in mafia. During the day, the town folks debate who they think is responsible for the crimes and put a player to court.

Contrary to mafia.gg, the accused player gets a chance to plead his innocence and come up with a defence. After that, the players vote guilty, innocent or abstain. If most players deem the defendant guilty, he is sentenced to death by hanging and the next night comes upon the village. The goal is to eliminate all players of your opposing faction.

The game offers lots of customization options. The players can choose their own map, house, pet and even their death animation. The games usually take longer and are more immersive due to the better visuals a fully developed game offers. It is perfect for larger groups of friends that have access to PCs and are willing to spend five Euros on a game, that offers hours of fun.

The biggest title in this category however is without a doubt “Among Us”. The game had an absolute hype in the summer of 2020. The game is set in a spaceship with a maximum of 15 crewmates. Between one and three crewmates randomly become impostors. The Impostors must kill or sabotage the crewmates. In contrary to the other games, Among Us does not alter between day and night-time. The players roam around the spaceship all at the same time. The crewmates must complete assigned tasks, like fixing wires or taking out the trash. They wander around the map at the same time as the impostors. The crewmates must try to complete their tasks, before the impostors kill enough players to win the game (it usually ends, when the number of alive impostors equals the number of crewmates. If a crewmate notices something suspicious or reports a body, an emergency meeting is called, where all players must discuss and vote for whom they think is the impostor. The player with the most votes gets thrown out the airlock. If the players successfully identify all impostors, or complete all their tasks before everyone is killed, they win the game. A killed player is not out of the game for good, they can still wander around the map as a ghost and watch the other players and complete their own tasks, and thereby still can contribute to the win of the crewmates.

But each map also offers the impostors the possibility to win via sabotage. If they deactivate the main reactor of the spaceship, the crewmates have only limited time to react and restart it, otherwise they lose immediately. To repair the sabotage, two tasks must be completed at different places on the map, so the crewmates must work together to fix it. During a sabotage, no meetings can be called.

The game saw many updates since its big hype in 2020, it now contains four maps, with the airship map being the newest addition. This map is also by far the biggest. It is suggested to play with 15 players on this map.

The latest update also added different roles. For the crewmates, there now is a scientist, who can see heartrates of each player and thereby know, who is still alive, an engineer who can access vents just like the impostors and the guardian angel, a role which gets assigned to the player who is killed first. He can for a limited time protect another player from being stabbed by the impostor. The impostors also got a new role, the shapeshifter. He can change his colour during the match and derby cause a lot of confusion amongst the crewmates. All roles get assigned by random and can be deactivated by the host in the starting lobby.

The game can cause very intense discussions, as the impostors often can get away with framing other players and through the option to call emergency meetings at any time, discussions are held very often. The game offers the best experience, if it is played with a large group in a voice chat. If the players like to engage in discussions, the game is perfect for them.

Deduction games like the three mentioned are getting more and more popular. They help us to improve our discussion skills and can help to detect liars in real life. Being able to stand your point in a discussion and persuade that you are right, and the others are wrong are skills, that will help everyone in their career. It is highly plausible, that all CEOs of successful companies are highly skilled deduction game players. Don’t be fooled!